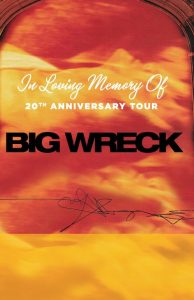 Canadian rockers Big Wreck will play the Burton Cummings Theatre as part of an anniversary tour to their debut album.

The “In Loving Memory Of 20th Anniversary Tour” rolls into Winnipeg on February 15, 2018.