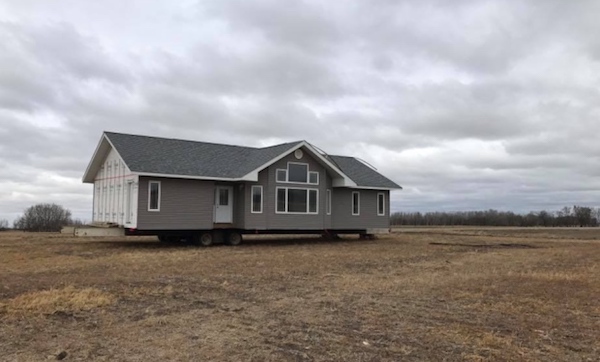 A house being transferred from Winnipeg ended up in a farmer’s field in rural Saskatchewan. (PATRICK MAZE / FACEBOOK)

PILOT BUTTE, Sask. – Patrick Maze is used to seeing flax and weeds on his farm field east of Regina, but where did the brand-new beautiful house come from?

Maze was driving by his land last week and noticed the home sitting on a big trailer where there should have been nothing but rolling prairie.

After doing a double take, Maze came back later with his border collie, Scarlett, to investigate.

“I thought it was strange,” he said Thursday. “Seeing a house was quite shocking.”

Maze figured either a moving company delivered the home to the property by mistake or the rig that was hauling it had mechanical problems.

In the hope of solving the mystery, he posted some pictures on Facebook and asked his online friends for advice.

Some neighbours also came by who were just as puzzled.

It turns out the house was being transported from Winnipeg to the owner in Lumsden, Sask., but there was a problem with permits.

The moving company left the house in the field until the paperwork could be sorted out.

Maze said the house was to be back on the road Thursday on its way to its rightful owner.