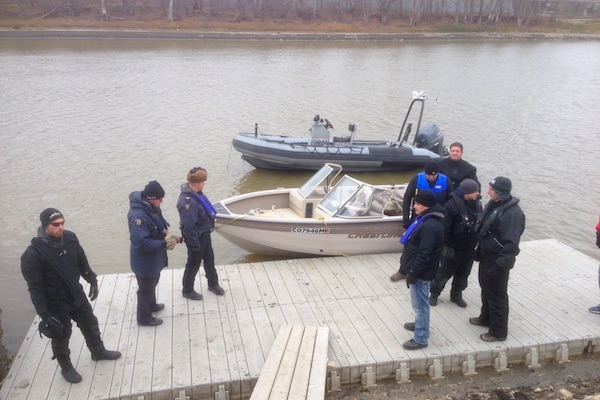 WINNIPEG — A two-day exercise has been teaching emergency responders and other officials the effects of cold water on the body.

Beyond Cold Water Boot Camp is a course being led by Dr. Gordon Giesbrecht of the University of Manitoba — better known as “Professor Popsicle.”

“We’re training emergency responders including law enforcement personnel, search and rescue members, and other educators about the dangers of cold water immersion and how to rescue and treat people who are in cold water,” said Giesbrecht.

Members of the Winnipeg police and Manitoba RCMP are participating, along with the Canadian Red Cross and the Lifesaving Society.

A mock rescue on Friday in the Red River behind the Winnipeg Rowing Club culminated the course, which also included a classroom component.

Giesbrecht is one of the leading experts on cold water effects and rescue, having published his 100th paper in a peer-reviewed journal this fall. He has previously held similar boot camps across Canada.

“One of the things we’re working on is exploring some of the myths around what really are dangers of cold water immersion and how to safely extract someone from the cold. And despite some popular opinion, we’re showing that you can actually warm and treat a rescued person safely in a pre-hospital setting.”