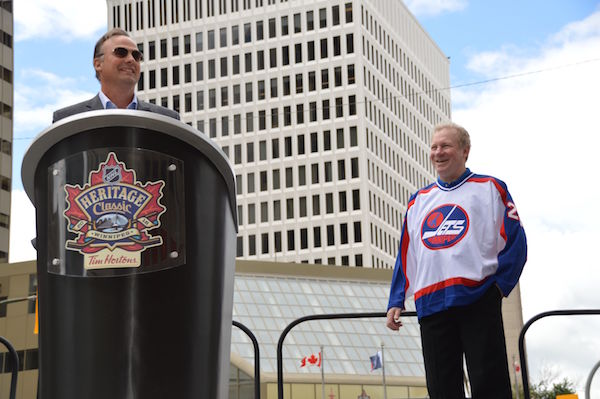 WINNIPEG — It’s been 27 years since Dale Hawerchuk last laced up his skates for the Winnipeg Jets, but the former NHL superstar still cherishes the memories and the noise of passionate Jets fans filling the old Winnipeg Arena, and how those fans treated him both on and off the ice.

“Winnipeg is a very special place for me,” Hawerchuk said. “I went there as an 18-year-old, spent nine years there, and I married a Manitoba girl.

“It’s a second home and being drafted number one was great, but being drafted by Winnipeg was even better. It’s a place I fell in love with, and the fans were so passionate and treated me so well.”

The now 54-year-old Hawerchuk, who was famously nicknamed ‘Ducky’ during his time in Winnipeg, was selected first overall by the original Winnipeg Jets in the 1981 NHL Entry Draft and spent nine seasons with the Jets.

He said the city of Winnipeg and the memories of playing for the Jets have been on his mind lately, as two special evenings are set to come to Bell MTS Place this month.

The Winnipeg Jets will take on the Montreal Canadiens this Saturday at Bell MTS Place, and the Jets and Budweiser have teamed up to hand out 13,000 commemorative Budweiser-Jets goal-synced glasses to the crowd that shows up that night.

The glasses will light up in unison when the Jets come out on the ice for the start of the game, and also anytime the Jets put the puck in the net on Saturday night.

Hawerchuk, who is currently the coach of the OHL’s Barrie Colts won’t be at the Jets game this weekend, as he’ll be behind the bench that night.

But he said he can only imagine how every Budweiser glass in the building lighting up in unison when the Jets score on Saturday will push both the Jets and the fans to “another level” during the game.

“It’s going to be awesome, and I know the Winnipeg fans are going to be pushing the team from that first moment,” Hawerchuk said.

“I’m hoping the crowd will push the team to score and to win the game. The fans in Winnipeg are famously loud and passionate, and this could take it to another level.”

Hawerchuk said he still remembers how Winnipeg fans also used to take their noise and passion to “another level” when the Jets hosted playoffs games in the old Winnipeg Arena back in the 1980’s.

“I remember the whiteouts and how the crowds would elevate the excitement when goals were scored,” he said. “It just made the whole experience so exciting.”

Hawerchuk is also looking forward to another special night coming up in Winnipeg this month, and he said he will definitely be in the building when the Jets take on the Arizona Coyotes on November 14.

Hawerchuk will be inducted into the Winnipeg Jets Hall of Fame that night when the Jets take on the Coyotes in Winnipeg.

A pre-game ceremony on the 14th will see Hawerchuk and Jets fans witness a banner with his name and number raised to the rafters at Bell MTS Place, where it will hang next to the banners of former Jets greats Bobby Hull, Anders Hedberg and Ulf Nilsson.

Hawerchuk said when he first skated out onto the Winnipeg Arena ice as an 18-year-old rookie in 1981, he couldn’t have imagined that one day the city would honour him and raise his number into the rafters.

“Skating out into that arena the first time was absolutely huge, and it was a dream come true,” he said.

“I used to play a lot of road hockey and I was the only one that made it from my street to an NHL arena. We all had those dreams and I was able to live it.”

He added the fact that the Jets will be playing the Arizona Coyotes on November 14 will make the night extra special.

“It’s the franchise I played for and the city I played for. It will be a very special night,” Hawerchuk said.

Along with great memories of the city of Winnipeg and its hockey fans, Hawerchuk said he also has a few special memories of his time with the Winnipeg Jets that still stand out to this day, including scoring his very first NHL goal against the New York Rangers in Winnipeg, and seeing Jets fans decked out in white during playoff games.

Although the team never made it out of their division in the 1980’s, Hawerchuk also has great memories of hard-fought playoff battles with both the Edmonton Oilers and Calgary Flames.

“We had a good hockey club and we put ourselves on the map,” he said. “It was always a big sense of excitement to play the Oilers and the Flames team because they were always considered the big Stanley Cup contenders.

“Those teams were always a great challenge, but that’s why you play the game.”

Hawerchuk will bring an impressive hockey resume to Winnipeg when he’s inducted into the Winnipeg Jets Hall of Fame this month.

Back in his rookie season of 1981-82 he became the youngest NHL player in history at the time to reach 100 points, and won the Calder Memorial Trophy for rookie of the year.

Hawerchuk played a total of 16 NHL seasons with the Jets, Buffalo Sabres, St. Louis Blues and Philadelphia Flyers, and retired with 518 NHL goals and 891.

His 1,409 points place him 18th on the all-time career NHL points list.

Hawerchuk was inducted into the Hockey Hall of Fame in 2001.