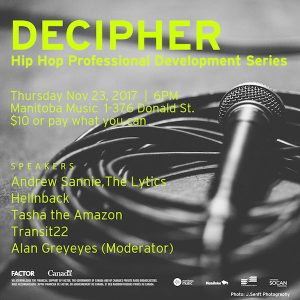 Manitoba Music has launched a new development series focused on the hip-hop community.

The series, which gets underway on November 23, includes an open discussion about the relationship between hip-hop and the larger music industry. Designed for Manitoba-based rappers, DJs, producers, promoters, and R&B acts, the event will featuring a panel of four rappers sharing their insights into navigating the industry.

Participating artists who will talk about their experience in the music scene include Tasha the Amazon from Toronto, Daniel Bennett of Calgary’s Transit22, and hometown hip-hop heroes Andrew Sannie of The Lytics and Carmen Omeasoo aka Hellnback.

Manitoba Music’s own Alan Greyeyes, who is a member of The JUNO Awards rap committee, will moderate a discussion aimed at finding opportunities and resources to move the local scene forward and help put Winnipeg on the national hip-hop map.

Decipher continues into 2018. Updates will be available at manitobamusic.com/workshops.