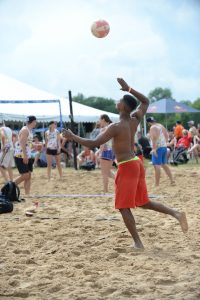 WINNIPEG — A summer volleyball tournament has tallied up its total and is now donating $87,936 to local charities.

Fifty percent of all funds raised will be donated to event partner Volleyball Manitoba, while the other half will be split between KidSport Manitoba and the True North Youth Foundation, each receiving $21,984.

“One-hundred percent of these funds will be used to remove barriers and help less fortunate children participate in sport — so all kids can play,” said Jeff Hnatiuk, president and CEO of Sport Manitoba.

The tournament was previously a fundraiser for the Winnipeg-based National Women’s Volleyball Team, who recently relocated to Richmond, B.C.