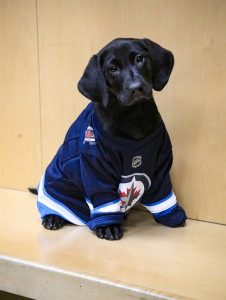 Winnipeg Jets fans have chosen “Lenny” as the name of its new canine security pup.

Jets season ticket holders submitted names to be shortlisted, with the general public casting their online votes for the finalists.

“Lenny” is a tribute to Jets superfan Len “Kroppy” Kropioski, a World War II veteran who passed away at the age of 98 in 2016.

The Jets announced the new name Friday night at the Winnipeg Jets NHL Centennial Fan Arena event to mark the 100th anniversary of the NHL.

Joining Dante, Daisy, Grace and Ryp, we are excited to announce the newest member of our in-house security dog team…