Remembering Those Who Served and Not Forgetting Those Left Behind 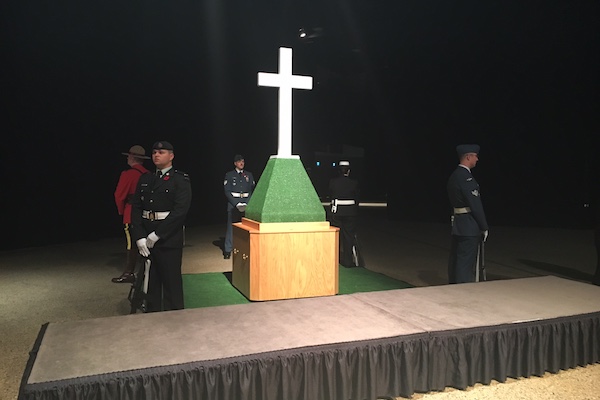 Saturday’s Remembrance Day ceremony at the RBC Convention Centre is one of the largest in Winnipeg. (MICHELLE BAILEY / CHRISD.CA)

“So many things were going through my mind as I walked up to lay the wreath today,” said Hayward, the 2017 Memorial Cross mother at the Remembrance Day service held at the RBC Convention Centre.

“It was very emotional, yet I was also so moved that all of these people took the time out of their day to be here.”

Hundreds gathered at the event to honour not only her son and others who dedicated their lives to fight for freedom, but to honour people like Hayward whose loved ones never came home.

In his address, The Reverend Dr. Bruce Miles said it’s just as important to remember those left behind.

“Two years later, we found out my brother was confirmed dead. His plane had been shot down. Families of the lost ones are not always remembered. Let 2017 be the year we change that.”

Hayward said through the sadness, she feels great pride that her son did everything in his young life to make a difference.

“He spent six months writing to students in schools back in Canada them know about what it was like to serve his country.”