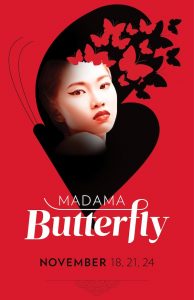 The Opera will open its 45th season with three performances November 18, 21 and 24 at the Centennial Concert Hall.

The production is the haunting and intensely moving story of a devoted young Japanese woman, Cio-Cio-San (Madama Butterfly), an ill-fated marriage, and her betrayal by an American naval officer, B.F. Pinkerton.

Pinkerton views the marriage as temporary, but she believes it is forever. The officer soon departs and returns three years later with an American wife. He is there to claim the one thing Cio-Cio-San loves more than life itself. Denied honour in life, she chooses honour in death.

Madama Butterfly will be sung in Italian with English translations projected above the stage.

← Previous: Remembering Those Who Served and Not Forgetting Those Left Behind Next: Guns, Ammo Seized from Magnus Avenue Residence →
Tags: Centennial Concert Hall | Winnipeg