One Person Killed in Accident During Training at CFB Shilo 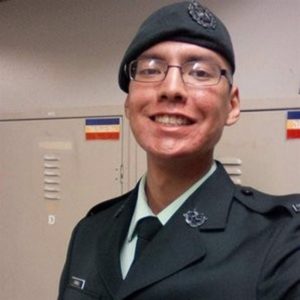 Corporal Nolan Caribou is shown in this undated handout photo. The Canadian military has launched an investigation after reservist Nolan Caribou died during a training accident in Manitoba on Saturday. The accident occurred at Canadian Forces Base Shilo, 35 kilometres east of Brandon, Man. (THE CANADIAN PRESS/HO – Department of National Defence)

OTTAWA – The Canadian military has launched an investigation after a reservist died during a training accident in Manitoba on Saturday.

Cpl. Nolan Caribou, who was an infantryman with the Royal Winnipeg Rifles of the 38 Canadian Brigade Group, was found dead at Canadian Forces Base Shilo.

The military said in a news release that Caribou’s death took place during a training exercise that focused on basic defensive routines, patrolling, and raids.

It said no live ammunition was used during the exercise.

The military said Caribou served with the unit for five years and has not been deployed operationally as a member of the Canadian Armed Forces.

The regiment is based out of Winnipeg’s Minto Armouries but was training at Shilo on Saturday.

Considerable training exercises are done at CFB Shilo, and the base is used by the Canadian military, RCMP and provincial corrections officers, as well as foreign militaries including Germany, France and the United States.

The military said there were multiple training exercises underway when the accident occurred.

It said that until the Canadian Forces National Investigation Service completes its investigation, it will not provide further details.

This is the third time this year a soldier was killed during a training accident on a Canadian forces base.

In April, Sgt. Robert Dynerowicz, a member of the Royal Canadian Dragoons based in Petawawa, Ont., died and three other soldiers were injured in an accident involving a light armoured vehicle during a training exercise at the CFB Wainwright in Alberta.

Master Cpl. Alfred Barr, a search-and-rescue technician from the 435 Transport and Rescue Squadron at 17 Wing in Winnipeg, died in March when his parachute malfunctioned during a training event near Yorkton, Saskatchewan.