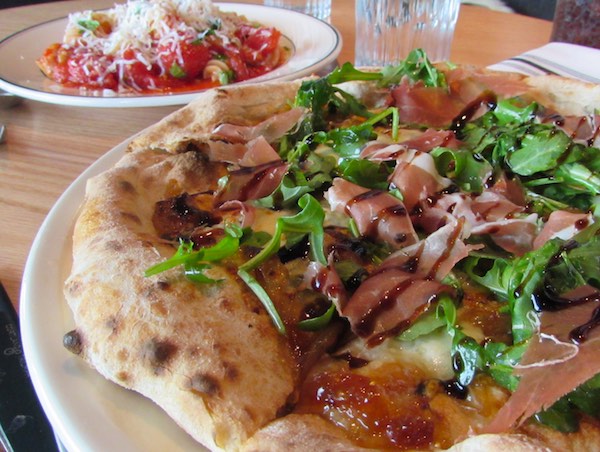 We were checking out the newly opened Harth, Mozza & Wine Bar in the south end of the city. The dining room was so elegant, I could not believe we were in a strip mall. The best part (next to the food which was exceptional) was the story that our server told us about Tony. Tony once owned and operated his own hair salon, but sold it and retired a couple of years ago. Since he liked working so much, he is making himself useful at Harth. In fact, I would say his efforts were instrumental as he handmade all of the fresh pasta and cured all the meats served in the restaurant. He also chopped all the wood for the giant pizza oven that dominates the front of the kitchen. The day we were there for lunch, he was doing dishes. “Why?” we asked our server. “Because the dishes needed doing,” he replied. We wondered if Tony cut hair in the kitchen too.

The secret to Italian food, as I have been told while travelling through Italy, are the ingredients. The Radditorie pasta, so named because the shape resembles a radiator, was simply tossed with exceptional ingredients-eggplant, heavenly tomatoes, surprising mint and ricotta salata. The latter being a fresh ricotta that is pressed and dried. The pasta was so delicious that I wished that the petite portion was a wee bit more substantial.

My lunch mate had a difficult time deciding which Neapolitan pizza to sample. In the end, she chose the Prosciutto which was also adorned with caramelized onion, gorgonzola, arugula and fior di latte. The latter literally means “milk’s flower” and distinguishes fresh mozzarella from cow’s milk rather than the traditional buffalo milk. The reason why my lunch mate was hesitant was the base of fig jam on the pizza. She prefers savoury to sweet tastes but I thought that the sweetness of the jam was the perfect foil to the pungent gorgonzola and the peppery arugula.

I could taste another ingredient in both the pasta and the pizza and that was “love”. Why would Tony come out of retirement to wash dishes, chop wood, cured meats and roll pasta? It could only be love.

Harth Mozza and Wine Bar is located at 1-980 St. Anne’s Road. They are open from Tuesday-Friday 11:30 a.m. to 2 p.m. for lunch and Monday-Saturday 5-11 p.m. for dinner. They remain closed on Sundays. Lunch and dinner menus are available and they are wheelchair accessible.