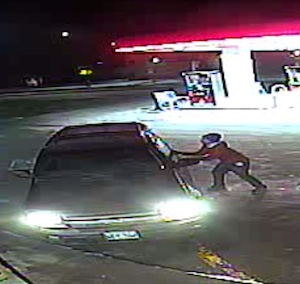 A man tries to open the door of a woman’s vehicle during a failed carjacking on Tuesday, November 21, 2017. Police are looking to speak with the victim. (WPS / HANDOUT)

Winnipeg police have charged a 25-year-old man with robbing a convenience store twice and then attempting to steal a woman’s vehicle.

Officers were called Tuesday to the 100 block of Salter Street at 10 p.m. for a report of a convenience store having just been robbed.

Police say the suspect stole several items, before leaving and returning to steal additional merchandise. He left and then tried to return a third time, but staff locked the door. The man threatened employees and then left to try and rob a gas bar across the street. Police say he threatened staff and broke a window, but was restrained and held for police.

Between the first robbery and the attempted second, police say he tried to rob a woman of her vehicle, but was unsuccessful. Police hope to locate the victim and speak with her.

Aaron Jay Ross has been charged with two counts of robbery, four counts of uttering threats and mischief under $5,000.

Anyone with further information is asked to contact investigators at (204) 986-6219.