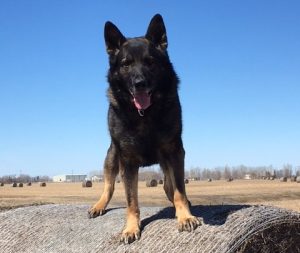 A 12-year-old boy and his father were found by RCMP and a canine unit Thursday when they became lost during a hunting trip northeast of Marchand, Manitoba.

RCMP got a call from the hunters at around 4 p.m. several hours after they had unsuccessfully tried to navigate their way back in the RM of Reynolds.

Their parked vehicle was found on the side of a road and RCMP enlisted the help of police dog Enzo to track their whereabouts.

Police tracked the pair for three hours and found the hunters healthy and uninjured. It took another two hours for the officers to get the hunters back to safety.

“Thankfully, this situation ended well. The hunters were prepared and able to call for assistance,” said Tara Seel of the Manitoba RCMP.

“The importance of our police dog services cannot be overstated; police dog Enzo and his handler were integral to this rescue.”

RCMP say before heading into the wilderness:

Police also recommended having a fully charged cell phone on you and remaining in one spot. Even without service, police can ping the cell phone to triangulate your location.