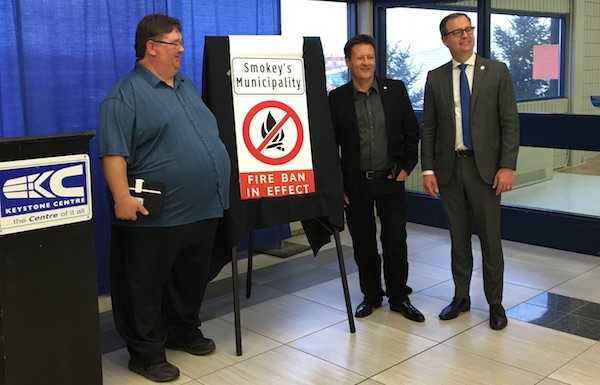 New signage for burning bans in Manitoba is unveiled at the Keystone Centre in Brandon on Tuesday, November 28, 2017. (@MIN_SCHULER / TWITTER)

The Manitoba government has unveiled a single look for roadside burning ban signs in the province.

During a meeting of the Association of Manitoba Municipalities (AMM) in Brandon on Tuesday, the province encouraged all local governments to adopt the new signage.

A variety of different signage is currently used to communicate a fire ban is in place.

“This consistent signage marks a vast improvement in public information with the goal of greater compliance and less risk to our natural resources, infrastructure and lives,” said Reeve Jim Swidersky of the RM of Stuartburn.

Current fire restrictions can be found on the province’s website.