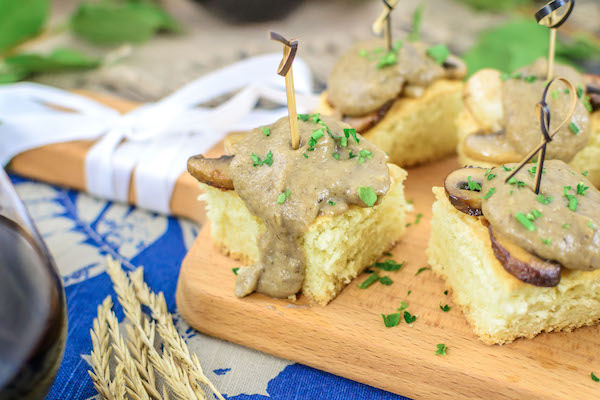 WINNIPEG, Man — The holiday party season is officially upon us! Whether you are hosting a bash or attending a potluck, it makes good sense to have a few easy, affordable and delicious party recipes in your arsenal. Personally, I like to have a bit of fun with party food and avoid the expected shrimp rings, spinach dips and chicken skewers. A party should be fun, after all! This year, I am excited to share with my friends and family a recipe I developed earlier this fall that is all-Canadian and unexpected; Mushroom & Bannock Bites. 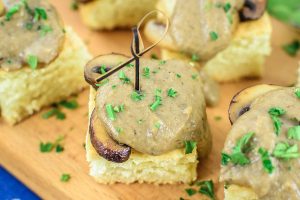 Using a classic bannock for the base of this appetizer, I pull from my Metis heritage to start off this unique Canadian party snack. The bannock is then topped with sauteed White Button and Crimini Mushrooms, the two most popular and accessible varieties in Canada. From there, it is crowned with a decadent and rich mushroom gravy made from broth, butter, mushrooms and a secret shot of Canadian Whiskey.  If this isn’t suited for a party, I don’t know what is!

Not in the party mood just yet? A reader recently made the mushroom gravy, thinned out with ½ cup of extra broth, and served it poured over egg noodles. It was a hit and truly makes for a fun dinner. Don’t worry about serving this to the kids! As you heat the gravy mixture, the alcohol cooks out of the Whiskey, leaving only its delicious flavours and none of its potency behind!

Get the recipe at Peppers and Pennies