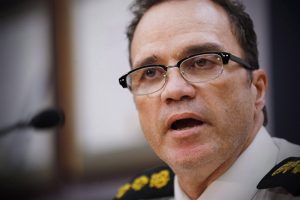 WINNIPEG – Winnipeg’s police chief says he will investigate whether more must be done to fight impaired driving in the city’s police force following the arrests of two more officers.

“We have a lot of programs available to our members here,” Smyth said Wednesday.

“I’ve begun reviewing and will continue to review, with my own executive, what more can we do.”

Smyth said formal charges have not been laid in the two most recent cases, so he would not name the officers involved. He said they were put on administrative leave.

“I feel terrible about (the allegations.) I expect better conduct from our officers around their decisions after being out socializing.”

The city police force has been under scrutiny in the past over impaired driving by off-duty officers.

A public inquiry was called into the 2005 death of Crystal Taman, a mother of three who died when her car was rear-ended by an off-duty officer at a red light early one winter morning just north of Winnipeg.

The inquiry heard Derek Harvey-Zenk had been out partying all night with fellow Winnipeg officers.

Harvey-Zenk originally faced charges that included impaired driving causing death and refusing a breathalyzer. He was convicted of lesser charges under a plea deal and sentenced to house arrest.

The inquiry heard that the investigation by the East St. Paul police force was botched and that the Winnipeg bedroom community’s police chief had previously worked with Harvey-Zenk.

Smyth said views on drinking and driving have changed, both within the force and among the general public, since Taman’s death.

He said the police force has voluntary programs to help officers who have a substance abuse problem, as well as mandatory measures that can be taken if an officer’s work is affected.

Smyth also said, while it’s impossible to completely control what officers do after they leave work, he has let his 1,400 members know impaired driving is not acceptable.

“I expect high conduct from our officers.”