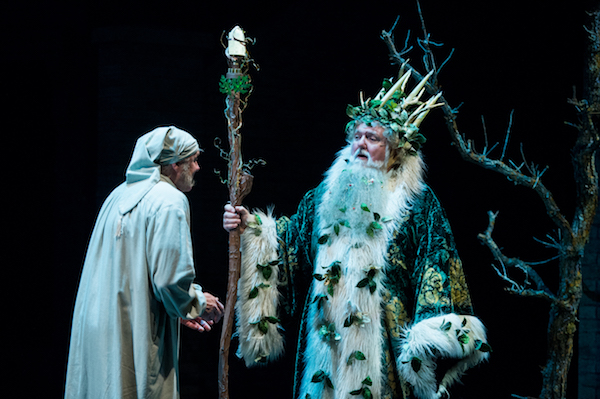 Robb Paterson and John B. Lowe in ‘A Christmas Carol’ (DYLAN HEWLETT PHOTO) 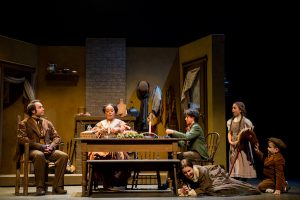 The cast of Royal MTC’s ‘ A Christmas Carol,’ on now through December 21. (DYLAN HEWLETT PHOTO)

WINNIPEG — I am a Christmas connoisseur. I’m Ralphie’s dad trying to steal a taste of the undercooked turkey, except with all aspects of Christmas. The music, the movies, the food, the company, even, occasionally, the weather. All this to say, I knew I was going to like Royal Manitoba Theatre Centre’s “A Christmas Carol” before I even walked in.

The pitch is simple enough: Charles Dickens’ A Christmas Carol, adapted for the stage. You know the story of how the frozen-hearted Ebenezer Scrooge, once visited by three ghosts on Christmas Eve, changes his perspective once he sees what really matters in life. This production is still a period piece, and is by no means particularly groundbreaking, but what really called to me was the expertise swarming this production.

Unlike “Shakespeare in Love,” RMTC’s last mainstage production, Carol’s set is massive and ever-changing. It seamlessly transitions between Scrooge’s office to his front door to his bedroom, where ghosts are appearing from the walls. The Victorian costumes are intricately designed, not just with lace and beads and curls meticulously tucked behind bonnets, but also with lights and smoke and fire. The real seller is the acting masterclass included with admission. Robb Paterson leads the company as Scrooge, who makes the choice to allow the audience to see his heart breaking, which is proof that he does, indeed, have one. Although this is a story about him, it is more about what he’s missing — the love of his friends and family. It requires a strong supporting cast, and that it delivers, from the likes of the multi-faceted Andrea del Campo, the jovial John B. Lowe, and the angelic Cherissa Richards, to name a few.

Although this is one of the most beloved holiday stories of all time, remember that this is also a ghost — Jacob Marley, played by the nearly unrecognizable Arne MacPherson, is a waterlogged, moldy version of his former self that haunts Scrooge as the harbinger of change. The faceless Ghost of Christmas Future is a tall, looming creature — albeit, a little corny in its faceless grim reaper hood and foam hands — who can only point at hints of Scrooge’s undoing until he is literally dragged into the grave. The play is still family-friendly, but be warned there are scenes that could frighten small children.

A friend recently asked me exactly why I love Christmas so much. Carol is exactly the reason — you make time for the ones you love at the holidays. Your priorities are set, and your loved ones are always at the top of the list. You care more about your fellow humans. And no matter how many times I’ve seen versions of this story — whether in traditional, Bill Murray or Disney form — it still brings up these feelings of fellowship and goodwill, especially in a time where we need it more than ever. It may not turn all Scrooges into Santas, but it’ll remind you to make time for what you love most. And even though I’ve heard it hundreds of times, and now it’s a cliché, Tiny Tim’s final line gets me every time.

A Christmas Carol runs until December 16 at the John Hirsch Mainstage, and on tour in a one-man-show across the province until December 21. For more information, go to RoyalMTC.ca.