Home » News » Christmas Cheer Board in Overdrive to Fill 18,000 Hampers

Christmas Cheer Board in Overdrive to Fill 18,000 Hampers 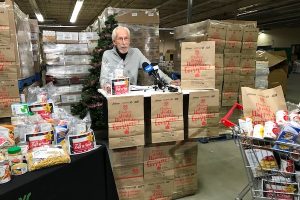 Kai Madsen, executive director of the Christmas Cheer Board, provides an update on this year’s operations during a media event on Tuesday, December 5, 2017. (CHRISD.CA)

WINNIPEG — Kai Madsen isn’t feeling nervous about how many hampers have yet to be filled at the Christmas Cheer Board before they start going out to deserving families later this week.

The annual operation to pack nearly 18,000 hampers for families and individuals in need is in overdrive as the first packages of food, gifts and turkeys prepare to leave the Cheer Board’s St. James warehouse.

“It’s a lot of fun to begin with,” Madsen, the Cheer Board’s longtime executive director, said on Tuesday.

“The kinds of things that we do at the warehouse have to be fun because it’s also hard work.” 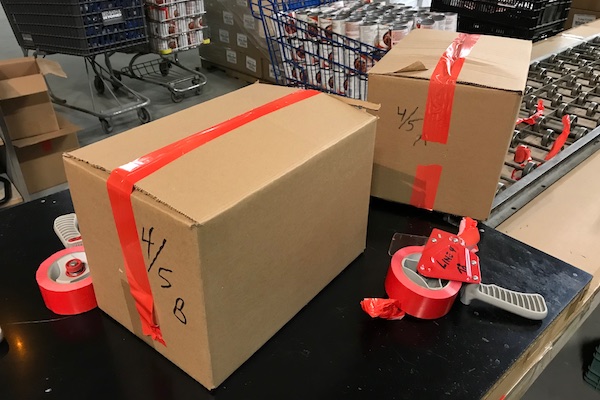 Between $300,000 to $400,000 worth of groceries are being sorted and neatly packed before they’re moved to a designated area within the warehouse labelled for each area of the city.

Volunteers have been hard at work for weeks to ensure the Christmas Cheer Board doesn’t come up short.

Madsen said the registered charity is on par to about where they were in 2016 as far as donations and cash, which he noted was a “really good year.”

Aside from groceries, Madsen says cash is king.

“I hate to be this crass, but we do have to pay the bills.”

A dent in those bills was made with the help of partner Safeway, Sobeys and IGA, who provided a $15,000 donation earlier in the day.

About 1,000 people are expected to collect their hampers beginning Thursday, with deliveries beginning city-wide on Saturday.

As of Tuesday, Madsen said they had about 10,000 hampers filled and ready to go.

Those wanting to make a donation or sponsor a hamper can do so online, or in-person at a number of locations across Winnipeg, including the Cheer Board’s office at 550 Milt Stegall Drive (between Ellice and Sargent).

← Previous: Legal Age to Smoke Pot in Manitoba to Be 19; Home-Growing Will Be Banned Next: Cavalia Odysseo Returning to Winnipeg in May →
Tags: Charity | Christmas | Christmas Cheer Board | Winnipeg