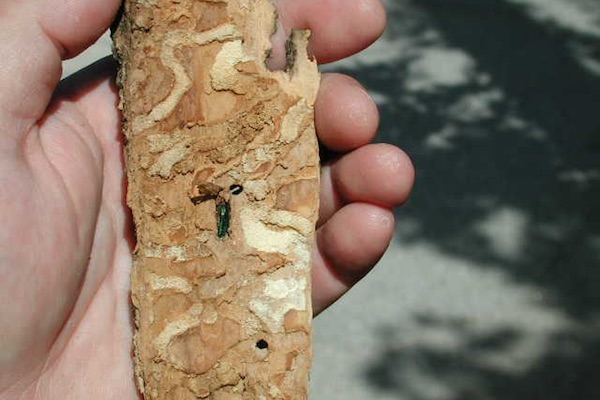 An adult emerald ash borer beetle. The destructive species has been discovered in a tree in the St. Boniface area. (CITY OF WINNIPEG)

The highly destructive emerald ash borer beetle has been discovered in Winnipeg.

The city and province confirmed on Thursday the wood-boring beetle is present in the St. Boniface area, which attacks and kills all species of ash trees.

“While emerald ash borer will have a significant impact on our urban tree canopy, the city has been preparing for its arrival for over a decade,” said city forester Martha Barwinsky. “We are ready to respond.”

The species has previously been found in Quebec and parts of Ontario.

The city plans to outline in a report early next year its plan to fight the beetle, which includes injecting a percentage of public ash trees with a botanical pesticide to preserve them as long as possible. The remaining trees on public property would be removed as they die and possibly replaced over time.

“We are working closely with our partners and will be finalizing our EAB management plans soon,” added Barwinsky. “The goal is to spread out the mortality of ash trees to allow more proactive management of tree removals and replacements, and to preserve our healthy ash trees for as long as possible.”

The city is partnering with the province and Canadian Food Inspection Agency (CFIA) on the issue. The CFIA notified the city of a confirmed find of an emerald ash borer larvae on November 30.

Survey and surveillance measures are being developed and will begin in January in St. Boniface.

Barwinsky says EAB beetles are generally dormant over the winter, making the next few months ideal for crews to prepare and conduct their surveying work.

“We still want to remind citizens not to move firewood which is good advice no matter the time of year. Buy it locally and leave it where you bought it.”

The city expects to lose 30 percent of boulevard and park trees valued at $437 million to EAB over a 10-year period. Ash trees on private property are also at risk of becoming infected.

Citizens are encouraged to help prevent the spread of EAB: