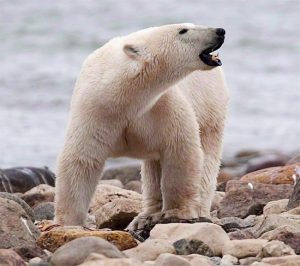 A male polar bear walks along the shore of Hudson Bay near Churchill, Man. on Aug. 23, 2010. (THE CANADIAN PRESS/Sean Kilpatrick)

WINNIPEG — The Manitoba government is looking north to increase tourism in the province, unveiling a five-year plan to boost visits to the region.

The Northern Manitoba Tourism Strategy, unveiled Friday in The Pas, aims to increase tourism expenditures in the north by $35 million.

While the north is fifth among six most-visited regions (outside of Winnipeg) in terms of total visitors, the province said it leads in average per capita spending at $219 per person per visit and is second in terms of the ratio of overnight to day trips.

“We know the products and experiences in Manitoba’s north are attractive to our target customers and we know visitors to the region tend to stay longer and spend more,” said Colin Ferguson, president and CEO of Travel Manitoba.

“This strategy provides a realistic roadmap as we work to grow tourism in northern Manitoba through product development, marketing and by leveraging community support.”

The strategy will focus on five key strategic priorities:

Tourism in Manitoba’s north generates $116 million annually in expenditures from an average of 530,000 visitors. Overall, tourism in the province is a $1.5 billion industry, drawing in 10.5 million visitors every year.