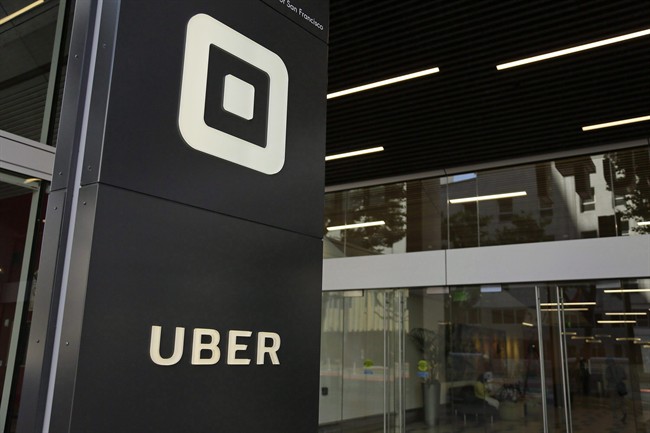 The building that houses the headquarters of Uber in San Francisco is shown on Wednesday, June 21, 2017. (THE CANADIAN PRESS/AP-Eric Risberg)

WINNIPEG — The city is proposing to charge Uber and Lyft riders a $0.03 surcharge per trip to be used to promote and market safety measures and requirements while using a ride-share service.

Changes on Monday to the Vehicle for Hire Bylaw say the surcharge would also fund promotion of passenger rights and the complaint process.

The fee is an alternative to having personal transportation providers (PTP) install safety shields in their vehicles. It doesn’t apply to taxi drivers, who already have shields installed.

“Many of my residents have raised concerns about safety with respect to the changes being proposed by the Vehicle for Hire Bylaw,” said St. Vital Councillor Brian Mayes. “I feel the introduction of a safety surcharge can help address these concerns.”

Other changes include allowing taxis to ride in the diamond lane on a one-year trial basis, removing the 20-year limitation period for transferable taxi licenses allowing them to remain valid in perpetuity, and reducing new taxi licenses from 120 to 60 effective March 1, 2018. The remaining 60 licenses would be introduced at the end of next year, selecting them using a lottery based approach.

If approved by city council, Uber and Lyft could begin freely operating in Winnipeg as of March 1.