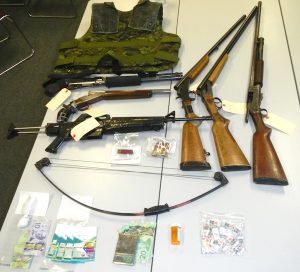 Five people were taken into custody in Portage la Prairie Wednesday on the suspicion of drug trafficking.

RCMP executed a search warrant at a home on 9th Street NW at around 4:10 a.m., where they seized six firearms, ammunition, cocaine, fentanyl, a ballistic vest and a quantity of Canadian currency.

Two 20-year-old men from Winnipeg, along with a 23-year-old man and two 16-year-old boys from Portage la Prairie, were arrested.

They face several charges related to drugs and firearms.