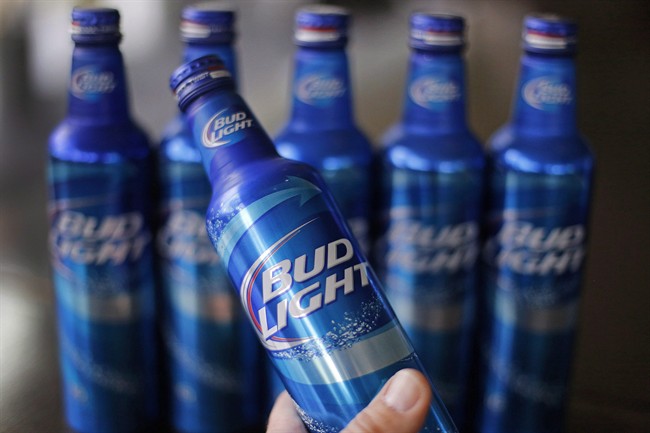 In this Monday, April 7, 2014, file photo, aluminum bottles of Bud Light beer are on display at Alcoa headquarters in Pittsburgh. Ordering a standard, big-brand beer in one Brandon, Manitoba restaurant can leave your wallet hammered a lot more than you. (THE CANADIAN PRESS/AP/Gene Puskar, File)

BRANDON, Man. – Ordering a standard, big-brand beer in one western Manitoba restaurant can leave your wallet hammered a lot more than you.

Prairie Firehouse in Brandon has decided to charge $15 for a regular-size can of Bud Light — double or more the price of other suds on the menu.

Owner Anna Dumas said she has nothing personally against Anheuser-Busch InBev, makers of Budweiser and other international brands.

She just wants to coax people into trying some of the craft beer on her menu from smaller breweries in Manitoba and other nearby provinces and states.

“Brandon is very much a Bud Light town and it’s a farm kind of culture and very small-town mentality,” Dumas said of the city of 49,000.

“I figured the only way I was going to get people out of their comfort zone was to charge a ridiculous price for a beer that I shouldn’t.”

The restaurant offers craft beer from Manitoba, Ontario, Minnesota and elsewhere — by the bottle or in pints of draft — for as little as $7.

Reaction so far has been mostly positive. But there are exceptions.

“There has of course been some negative and some people that, you know, (say) OK well they’re never coming back to the restaurant or whatnot.”

Dumas said she got the idea from one of her chefs who previously worked at a Calgary restaurant that charged $25 for some big-name beers. Eventually, she hopes to have only craft beer on the menu.

The Manitoba Brewers Association, which represents small craft breweries in the province, likes the financial incentive for people to try out local suds.

“We give back, we practice buying local as a brewery and it’s just nice to be able to see some reward come back to us as far as offerings at the table.”