Review: Royal MTC’s ‘Come From Away’ 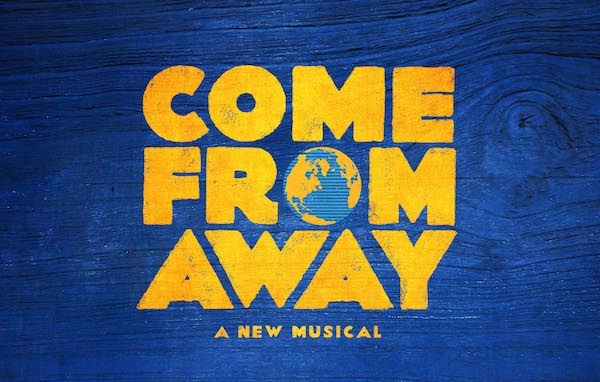 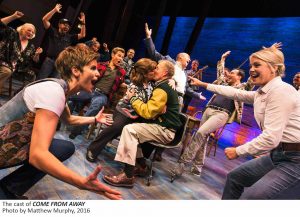 WINNIPEG — As a Broadway nerd, I immediately devoured the “Come From Away” cast recording when it was initially released nearly a year ago. I have to be honest — first impressions were not good. I couldn’t understand why this show, which sounded to me like 90 minutes of Great Big Sea covers, was generating so much buzz. Perhaps it was because I had seen some of the other blockbusters that shared the same theatre season with it and those other productions overwhelmed me so much that I couldn’t see how this little show would stack up. I had a friend, who saw an earlier pre-Broadway production, tell me that I just had to see it and the cast recording didn’t do it justice.

So, okay. It’s a big deal for Winnipeg to host the world regional premiere, meaning every other production of this show, though it has travelled, has been the same cast — the one that’s on Broadway. This is a new cast and a new production, and it’s making its debut in the heart of the continent. It’s a big deal for Winnipeg to have this premiere of any show, let alone one that’s still running in New York. That’s pretty unheard of. Unsure that I would enjoy myself, I got a ticket. And I’m thrilled to report that all of my pre-conceived notions about this show were horrifically wrong.

I’m happy to report that in context, it does not sound like 90 straight minutes of Great Big Sea covers (no offense, Great Big Sea fans). For a show that begins on 9/11, it’s not really about 9/11. Come From Away is about what happened in Gander, Newfoundland after 38 planes (over five times more what Gander’s airport usually sees in a day) landed there when the U.S. airspace closed. The “plane people,” as they’re called, stayed in Gander’s community centres, school gyms and hockey rinks for five days. This show’s inciting incident might be 9/11, but it really happens around that event. It’s about the people of Gander, the plane people, and as the one of the songs goes — “Something in the middle of nowhere / In the middle of clear blue air / You’ve found your heart.”

The Royal Manitoba Theatre Centre is in a delightfully difficult situation where they can’t find enough seats for all the people who want to see this show. Before its first performance, the entire run sold out. Another show was after the originally scheduled closing date, and since then, more matinees have been added, and they’re all sold out too. If you aren’t one of the lucky ones who managed to snag a seat to this limited engagement, you missed out.

In addition to the composers of the show, Irene Sankoff and David Hein, hailing from the great white north, the entire cast is also all Canadian. Winnipeggers will see some familiar faces — such as Saccha Dennis, last seen as the fabulous, baby Deloris van Cartier in Rainbow Stage’s “Sister Act,” and Steffi Didomenicantonio, last seen as Fraulein Sally Bowles in Royal MTC’s “Cabaret.” Usually when I write reviews, I try to name the standouts, but in this cast of 12, they’re all spotlighted equally. All of the members of the cast are standouts, which is fitting for a show centered around community.

This show is deceivingly simple — a single wooden set, mismatched chairs, no costume changes except for the exchange of hats or jackets — but if you pay attention, you’ll notice how many intricate technical details exist. The cast switches lines back and forth quickly and seamlessly that you forget time is even passing. The story never stops and it was difficult for me to peel my eyes away from the stage. I didn’t want to. There was always something or someone to watch.

It felt like, especially after coming inside from the frigid wind, this story filled my entire body with a hearty soup. As someone sitting behind me said after curtain call, “that felt so good.” Come From Away did something that a piece of art, theatre or otherwise, has never done for me before: it made me homesick for a place I’ve never been. Screech, anyone?

Come From Away officially opens at the John Hirsch Mainstage on January 11 and runs until February 4. For more information, go to RoyalMTC.ca.

* This review is based on a preview performance. Any and all aspects of the production are subject to change before opening night.