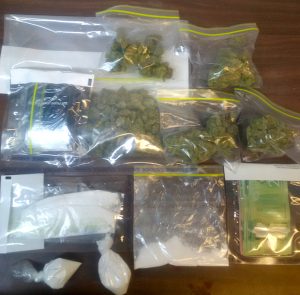 Drugs seized during a raid in Thompson, Manitoba on January 13, 2018. (RCMP HANDOUT)

RCMP in northern Manitoba raided a home on Saturday, seizing a number of drugs in the community of Thompson.

Police executed a search warrant at a home at around 10 p.m., where they found approximately 113 grams of cocaine and 170 grams of marijuana. They also seized other drug paraphernalia and an undisclosed amount of cash.

A 26-year-old man is facing drug-related charges. He was released on a promise to appear.