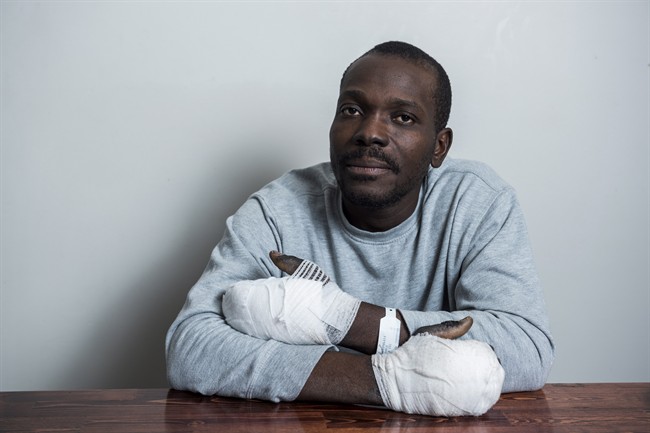 Kangni Fiowole-Kouevi is shown at the Hospitality House Refugee Ministry in Winnipeg on Tuesday January 16, 2018. Fiowole-Kouevi says he was not sure he had made it to Canada when, struggling to work with frozen fingers in -23C weather, he dialled 9-1-1 on his cellphone. (THE CANADIAN PRESS/David Lipnowski)

WINNIPEG – Kangni Fiowole-Kouevi says he wasn’t sure he had made it to Canada when — overcome by bitter cold and barely able to use his hands — he took a risk and dialled 911 on his cellphone.

Fortunately for the 36-year-old from Togo, he had made it across the border near Emerson, Man. in the dead of night. He is the latest African asylum-seeker to face the possibility of losing his fingers to frostbite after crossing the border on the open prairie in the dead of winter.

“I started to suffer enormously,” he recalled in French Tuesday as he sat at the kitchen table in a home run by Hospitality House Refugee Ministry, a Winnipeg non-profit group. His hands remained in bandages.

“I fell, I cried, I was in agony. I didn’t know how I would survive the cold.”

Fiowole-Kouevi said he fled religious prosecution in Togo, where he converted to Christianity in defiance of his family’s wishes. After making it through South and Central America, he said he arrived in the United States, was detained and eventually rejected for asylum.

He said he decided to head to Canada via Minneapolis where he paid a man $700 for the seven-hour drive to the border. The night of Jan. 5, he was dropped off somewhere along the highway south of Emerson and started to walk, he said.

The temperature was below -20 C. He was dressed for winter but his gloves were not enough. He said he walked for more than four hours.

“I started to raise my hand to trucks that were passing but they did not stop.”

Eventually he found what appeared to be an abandoned building of some sort, got out of the wind and called 911.

RCMP say they received a call at 5:45 a.m. on Jan. 6 from a man who had crossed the border alone and could not describe his location. Spokeswoman Tara Seel said it took two hours to find him and the man was taken to the border office and the hospital for treatment.

Fiowole-Koeuvi said he is hopeful he will not lose any fingers, but doctors had yet to make a final decision. His refugee claim is expected to take months.

His story is similar to that of Razak Iyal and Seidu Mohammed, two men from Ghana who walked across the border Dec 24. 2016. Iyal lost all his fingers to severe frostbite, but kept his thumbs. Mohammed lost all ten digits.

The two men had walked seven hours in the frigid cold and had walked past Emerson before they were found 14 kilometres further north.

The long walks have the reeve of Emerson-Franklin — a merged community that includes the town and surrounding rural area — scratching his head as to why drivers are not dropping off asylum-seekers closer to the border.

“I don’t know if there’s something going on in the U.S. that these drivers that are bringing these people — if they’ve been threatened or something at the other end — but it seems like they’re almost dropping them off further away,” said Greg Janzen.

“Even to walk two miles in this weather is ludicrous.”

There is an old border station immediately southeast of Emerson in Noyes, Minn. It’s been closed for more than a decade, but the road is still there and a gate is the only physical barrier. Anyone who ducks under or walks around the gate is within 200 metres of the outskirts of Emerson and about 600 metres from a hotel.

A kilometre to the west lies the official port of entry along the main highway between Winnipeg and North Dakota.

Most asylum-seekers avoid that crossing because, under the Canada-U.S. Safe Third Country Agreement, people who applied for refugee status in the United States first must be turned back at official border points. If they manage to get on Canadian soil before being apprehended, they are allowed to stay while making a refugee claim.