Teen Raises $30K Worth of Baby Formula for Winnipeg Harvest 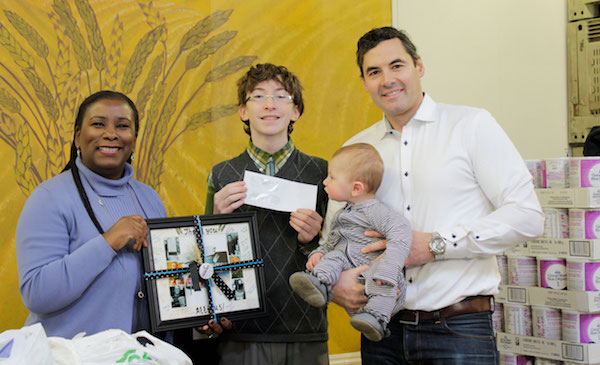 A Winnipeg teen set a goal and stuck to it in an effort to raise much-needed funding and baby supplies for Winnipeg Harvest.

Atticus McIlraith is no stranger to doing good deeds for the local food bank. The 14-year-old has raised just over $70,000 to help babies in Manitoba since 2013.

On Wednesday, he presented Winnipeg Harvest with a cheque from his latest efforts to the tune of $30,305.

Baby formula is the only item Winnipeg Harvest needs to purchase and is rarely donated because of its cost.

“I never went hungry as a baby and no baby should ever go hungry. Being able to help the community is important to me and when I heard the need five years ago, I knew I had to help,” said McIlraith.

The campaign also received support from Judy Lindsay Team Realty, which contributed $1,000. The company will also donate $500 worth of baby formula if one of their customers calls and asks to support the campaign during their home-buying process.

Winnipeg Harvest provides emergency baby formula to an average 1,600 babies under the age of one every month.