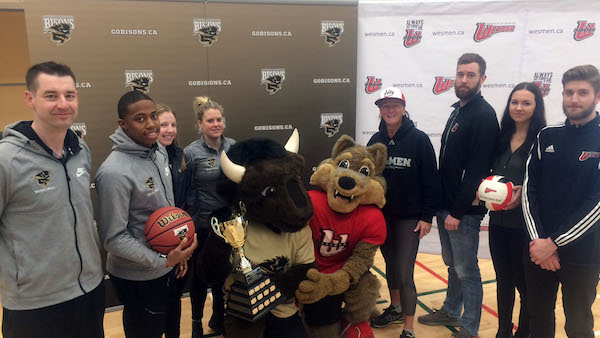 The 27th annual Duckworth Challenge concludes on Friday night with basketball at the U of M. Both volleyball teams are in action tonight at UWinnipeg. (GOBISONS.CA)

WINNIPEG — It’s a cross-town rivalry in its 27th year and it’s never been stronger.

The annual Duckworth Challenge continues tonight as the University of Manitoba and University of Winnipeg battle it out on the volleyball court on Wesmen turf (Dr. David F. Anderson Gymnasium).

After drawing a tie in women’s soccer in the earlier portion of the challenge last fall, the Manitoba Bisons and Winnipeg Wesmen are both in it to win it.

Despite the friendly rivalry, all games are counted in the Canada West standings and register as conference regular season matches.

Both teams conclude their fight for bragging rights (and a shiny trophy) on Friday, January 19 at Investors Group Athletic Centre, where basketball is on the agenda. The women get things going at 6 p.m. with men following at 8 p.m.

The women take to the volleyball court tonight at 6 p.m. with the men’s game at 7:45 p.m. Tickets are available at the door.