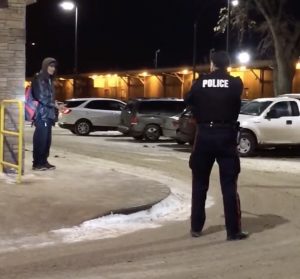 A video on Facebook Wednesday night shows the moments leading up to when police Tasered a man outside of a Winnipeg Tim Hortons after he was suspected of hiding a shotgun under his jacket.

Police were called for an armed man in the area of William Avenue and Isabel Street at around 6:30 p.m. Police say the suspect appeared to have the barrel of a shotgun under his jacket when they arrived.

Officers are seen on the video demanding the man remove his hand from his right pocket. The man eventually complies and officers move in closer. The camera pans away for a moment and an officer deploys a Taser on the suspect when he doesn’t put his hands in the air as instructed. He immediately falls to the ground and officers make an arrest.

He was taken into custody and found to have a metal pipe strapped to a long piece of wood.

The same man is said to have caused a disturbance earlier at a business in the 100 block of Isabel Avenue when he pointed the object at an employee who thought it was a gun. Police say he then attended another nearby business and threatened to “fire” at an employee, who ran to the back.