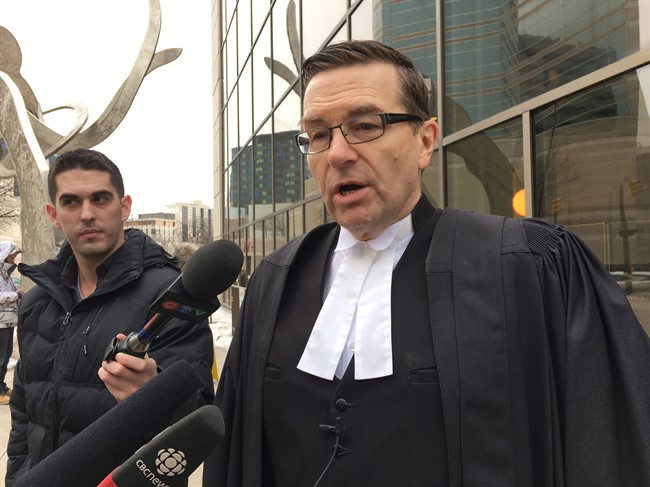 Defence lawyer Mike Cook speaks to reporters outside the Winnipeg courthouse after his client Ron Siwicki, pleaded guilty to criminal negligence causing death on Monday Jan. 22, 2018. Court heard Siwicki left his injured mother to die on the floor of the home they shared. (THE CANADIAN PRESS/Steve Lambert)

WINNIPEG – A Winnipeg man has admitted to leaving his 89-year-old mother, covered in her own feces and urine, lying on the floor of the home they shared for several days until she died.

Ron Siwicki, 65, pleaded guilty Monday to criminal negligence causing death, which carries a maximum life sentence. The musician is to face a sentencing hearing on June 26.

A charge of manslaughter was stayed by the Crown.

Siwicki’s mother, Elizabeth, had suffered from dementia since 2012 and had not had a refill of any prescription medications in the nine months before her death, said a brief statement of facts read by Crown attorney Alanna Littman.

After falling out of bed in November 2014, Littman said the elderly woman suffered some sort of injury and was unable to get up.

Defence lawyer Mike Cook said the mother had told her son she did not want medical treatment and, unable to lift her back into bed, he tried to care for her by giving her nutritional supplement drinks and water.

“He was still very attentive to his mom. He provided her with food, hydration. He took care of her basic needs, but there came a point where he was overwhelmed,” Cook said outside court.

Littman told court that Siwicki left his mother alone on two evenings while he went out to play gigs. There was so much of her own feces and urine around her that the carpet underneath her had buckled. She had bedsores that extended down to her bones in some areas.

Only after she had died did Siwicki try to clean her and call an ambulance, Littman said.

Siwicki answered “yes” when asked by the judge whether he was agreeing to the facts read in court.

Cook said Siwicki had lived with his mother all his life and was probably reluctant to clean her private areas out of embarrassment.

The defence lawyer said he will ask for Siwicki to be allowed to serve his sentence in the community, but added that the Crown is going to seek time in custody. Neither side specified how long a sentence each will seek.

Siwicki has been out on bail and has received support from friends and fellow musicians.

On a Facebook page for Winnipeg musicians, friends said Siwicki took great care of his mother following the death of his father years earlier.