Home » News » Fatal Collisions Down in 2017 on Manitoba Roads: MPI

Fatal Collisions Down in 2017 on Manitoba Roads: MPI 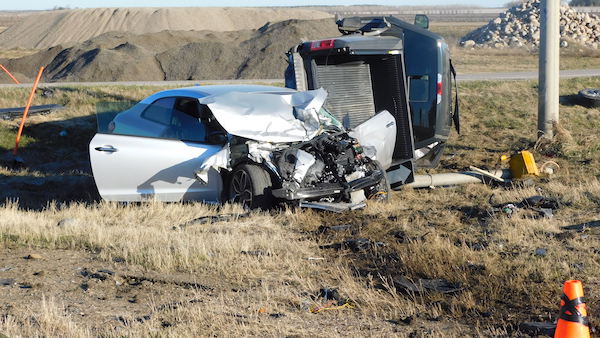 Two people were sent to hospital after a two-vehicle crash on the Trans-Canada at the intersection of Highway 5 in this April 2017 file photo. (RCMP HANDOUT)

Last year was one of the safest on Manitoba roads since 1982, new figures released by Manitoba Public Insurance show.

“While it is very positive that road fatalities in 2017 were the second lowest in the last 35 years in Manitoba, the fact that 73 lives were lost is a stark reminder that much work still needs to be done to change the driving culture within our province,” said Ward Keith, vice-president of business development and communications, CAO, MPI.

MPI says a full analysis of collisions last year is still under review, but preliminary data shows that impaired driving, distracted driving, speed, and not wearing seatbelts continue to be primary contributing factors in fatal collisions.

Of the 73 deaths, seven were motorcyclists and 11 were pedestrians. There were no cyclist deaths reported in 2017.