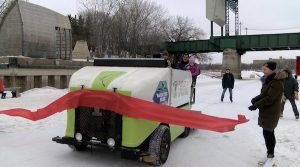 The ribbon is cut to officially open the Red River Mutual Trail at The Forks on Tuesday, January 23, 2018. (CHRISD.CA)

WINNIPEG — It’s been in the works for weeks, but the Red River Mutual Trail now extends 7.5 kilometres.

Skaters can glide from The Forks to Churchill Drive on the Red River and to Arlington Street on the Assiniboine River.

“We’re excited to be afforded the conditions to extend the trail down both the Red and Assiniboine this year, and offer this mode of connection to various communities,” said Paul Jordan, CEO of The Forks.

“It’s outstanding to see this city come to life on the rivers in the wintertime – whether people are using it to commute to work daily, or as a fun family activity on evenings and weekends.”

The trail opened December 22 and has been open for 33 days — the same length of time skaters were able to enjoy it throughout the entire 2017 season. Officials say the trail broke records last weekend, attracting 77,000 visitors. This season also marks the longest the trail has ever been since 2009, when it reached about 6.5 kilometres.

Along with the natural skating trail, one-kilometre of on-land skating trails through Arctic Glacier Winter Park are open, as well as the toboggan run and hockey rink near Festival Park.