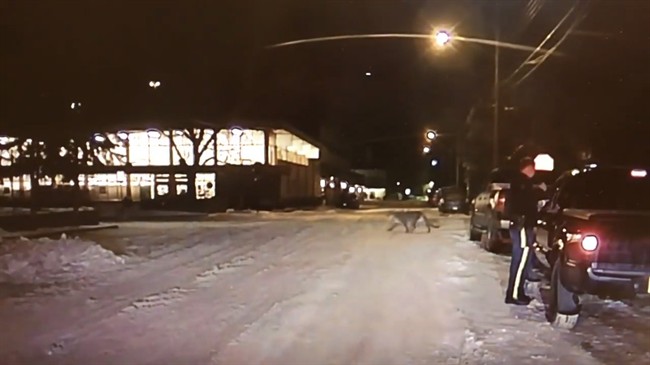 A cougar walks across the street as an RCMP officer attends to a traffic stop in Banff, Alta. in this handout image taken from an RCMP dash camera video. An RCMP officer on a traffic stop in Banff caught more than he expected on his car’s dash camera. The video, which shows the constable talking to a motorist, captured a cougar dashing by a couple of metres away, in front of a grocery store. (THE CANADIAN PRESS/HO, RCMP)

BANFF, Alta. – An RCMP officer on a routine traffic stop in Banff, Alta., caught more than he expected on his car’s dash camera.

The video, which shows the constable talking to a motorist, captured a cougar sneaking by a couple of metres away — in front of a grocery store. It shows the officer briefly turning his head to look at the big cat.

A seven-second clip from the video, taken around 3 a.m. on Jan. 9, is posted on the Alberta RCMP’s YouTube page.

“It certainly is unique to see (a cougar) in the urban areas of Banff,” said RCMP Staff Sgt. Mike Buxton-Carr.

“Staff went out and forward-tracked the animal and later the next day we were able to back-track it,” said Bill Hunt, manager of resource conservation with Banff National Park. “It didn’t come across any garbage or anything that would give it a food reward.

“So, as soon as it got back out of town, it carried along through the wildlife corridor.”

Cougars are known to frequent wildlife corridors around Banff.

“We try to discourage that as much as possible,” said Hunt, who notes they are hoping the cougar doesn’t return. “I am sure this happens several times a year and goes completely undetected.

“Cougars can be pretty elusive so they are hard to spot.”

Coming across a cougar is quite different than encountering a bear, he said.

People should makes themselves look big, try to intimidate the animal, grab pets or small children and throw sticks or rocks.

Officials also ask that anyone spotting the big cat report it immediately, so wildlife officers can track it and figure out what it was doing in the area.

See the clip from the Banff RCMP video: