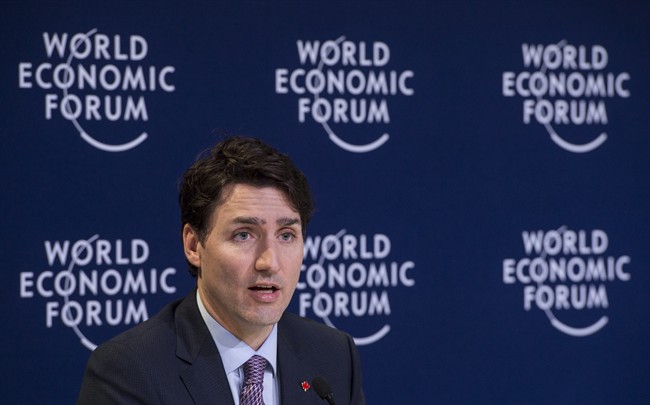 Prime Minister Justin Trudeau responds to a question during the closing news conference at the World Economic Forum Thursday, January 25, 2018 in Davos, Switzerland. Trudeau is saluting the courage of women who’ve levied allegations of sexual misconduct against the former leader of the Ontario Progressive Conservative party. (THE CANADIAN PRESS/Paul Chiasson)

Trudeau will appear at a town hall event at the University of Manitoba’s Max Bell Centre on Wednesday, January 31.

The public event is an opportunity to connect with Canadians and discuss a number of issues.

The website of Winnipeg South MP Terry Duguid says Trudeau’s appearance is a chance to discuss “how we create growth that works for everyone, prepare for the jobs of the future, and build a stronger more resilient middle class.”

Doors will open at 5 p.m. with the town hall getting underway at 7 p.m.

Trudeau is currently wrapping up a trip at the World Economic Forum in Davos, Switzerland.