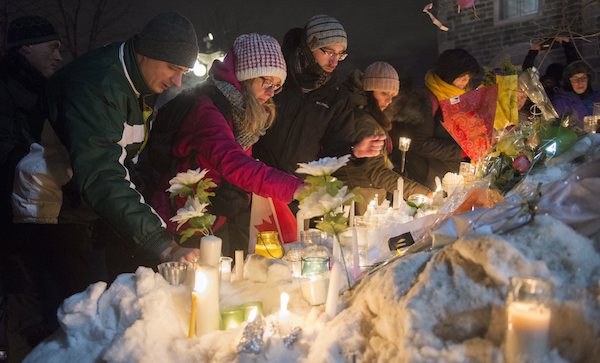 People place candles during a vigil in Quebec City on Monday, Jan. 30, 2017, for victims of the deadly shooting at a Quebec City mosque. (Paul Chiasson/The Canadian Press via AP

Winnipeg’s Muslim community is coming together tonight to mark the one-year anniversary of the Quebec City mosque shooting.

Six worshippers were killed and 19 others injured in the deadly attack last January 29.

“Islamophobia continues to negatively impact upon community members’ sense of safety and wellbeing — this, most particularly felt amongst our children,” said Shahina Siddiqui, executive director of the Islamic Social Services Association (ISSA).

Muslims and community members at large plan to gather at the Manitoba legislature from 7-8 p.m. to commemorate the attack. Ceremonies will include a Quran recitation, an Indigenous-led smudging and drumming ceremony and a silent procession and candlelit vigil. Alongside reflections from Muslim and Indigenous community leadership, the non-partisan event will feature brief remarks from Winnipeg and Manitoba elected officials, including Mayor Brian Bowman, Rochelle Squires (Minister responsible for the Status of Women), Manitoba NDP leader Wab Kinew and Manitoba Liberal leader Dougald Lamont.

“At length, we hope that January 29 will be a day upon which civil society can work towards developing and legislating concrete actions to eliminate xenophobia and Islamophobia across Canada,” Siddiqui added.

The event is open to the public.