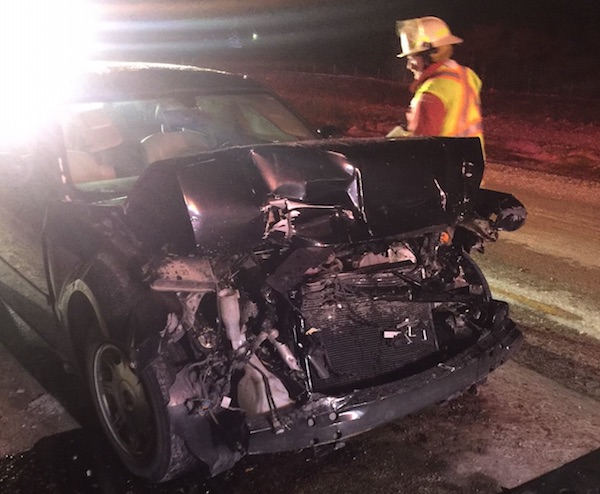 In this December 15, 2016 file photo, a vehicle slammed into the back of a tow truck on Highway 216, nearly striking the driver working at the roadside. (CAA MANITOBA / HANDOUT)

WINNIPEG — A CAA Manitoba tow truck driver and a contractor were both involved in close calls Monday night when speeding motorists failed to slow down and move over while the two worked on the side of the road.

The incidents have promoted the automobile club to renew calls for drivers to be cautious when passing a working tow truck.

A CAA driver was assisting a motorist on Inkster Boulevard when a delivery truck sped closely by, forcing the driver to throw himself into a snowbank to avoid being hit. In another instance, a contractor was helping a motorist on a side street in St. James when a truck drove by and clipped him with its side-view mirror. Both drivers were unhurt and neither passing motorists stopped to check on their well-being.

“Our tow truck drivers, like other emergency workers, should not have to put their lives at risk,” said CAA Manitoba spokesperson Liz Kulyk.

“It’s important that we all practice safe driving habits, including driving to conditions and slowing down and moving over when there are flashing lights at the side of the road. Both of these habits can not only save drivers from expensive collision damage, but help them save lives.”

The penalties for not giving one lane of space on a multi-lane road and slowing down while passing a working tow truck is a $300 fine up to $2,000, two demerits, and/or a one-year driver’s licence suspension. The Highway Traffic Act states that drivers must slow down to 60 km/h in an 80 km/h or higher zone, or to 40 km/h if the posted speed limit is less than 80 km/h.

← Previous: Grisim: Tales from 'Home Away for Home' at Airbnb in Arizona Next: Tow Truck Carjacked as Man Threatens to Shoot Driver →
Tags: CAA Manitoba | Winnipeg