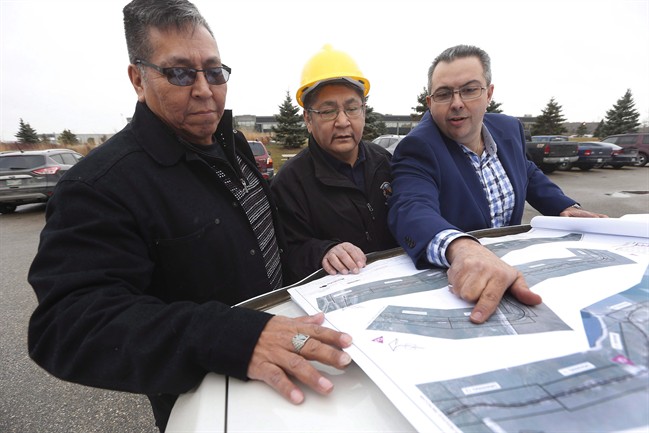 From left, Daryl Redsky, consultation officer, Chief Erwin Redsky, both of Shoal Lake 40 First Nation, and Phil Cesario, design project manager at PM Associates Ltd. go over the final design drawings for Freedom Road, an all-weather road which will connect the reserve to the Trans Canada highway, in Winnipeg on November 25, 2016. The final phase of construction is about to begin on an all-weather road for an isolated Indigenous community separated from the outside world more than a century ago. Freedom Road will provide a year-round landlink between the Shoal Lake 40 First Nation in northwestern Ontario and the Trans-Canada Highway in Manitoba. (THE CANADIAN PRESS/John Woods)

WINNIPEG — All three levels of government have moved forward to fund construction of the second phase of the Shoal Lake Band 40 all-weather road, connecting the community to the Trans-Canada Highway.

Called Freedom Road, the highway is a major milestone for the community, which straddles the Ontario-Manitoba boundary and has an on-reserve population of about 290 people

“For the people of Shoal Lake 40, building Freedom Road has been a declaration of our right to exist — a right to be included in Canada that we began asserting in 2003,” said Chief Erwin Redsky, Shoal Lake 40 First Nation.

“Without safe access, our community could not survive physically nor economically. Winnipeg’s water diversion took away our access so it’s fitting that Winnipeg, Manitoba and Canada are part of our shared solution.

Fifteen kilometres of roadway will be constructed through a joint agreement between the city, province, Ottawa and Shoal Lake 40 First Nation.

The final phase of the work to connect Shoal Lake 40 to the all-weather road system is the construction of a bridge over the City of Winnipeg Aqueduct, which is currently out for tender.

The total project is costing $30 million. Once finished, it will reconnect the community to the mainland since it was cut off in 1915 to create a channel meant to bring water to Winnipeg.