One Lucky Youth Basketball Team Will Party with the Wesmen 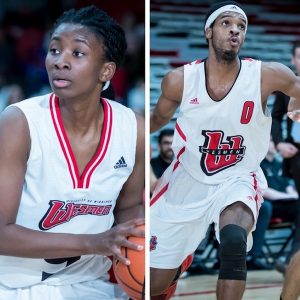 The Winnipeg Wesmen want to share their playoff celebrations with a youth basketball team in the province.

The University of Winnipeg basketball squad is holding a contest to reward one lucky youth team with the chance to party in the Duckworth Centre’s corporate suite with pizza and drinks at Thursday night’s Wesmen playoff games.

The winning team will be announced at the end of the first quarter of the women’s game against the Northern British Columbia on Thursday. At that time, players and coaches will be moved up to the suite for the rest of the night. The men’s game follows at 8 p.m. against UNBC.

Youth 18 and under will be admitted free of charge to the game. Fans are also encouraged to wear red in support of the Wesmen’s #RedAllOver campaign.