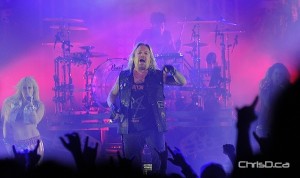 Four new shows are on deck in the coming months at Club Regent Event Centre.

Casinos of Winnipeg has announced Naughty by Nature and C+C Music Factory will play May 4 as part of a 90’s Dance Party Triple Bill. The night also includes Freedom Williams & SNAPP!’s Thea Austin.

Mötley Crüe’s Vince Neil with guests Helix will play for a Winnipeg crowd on April 19.

A second show has been added for Menopause the Musical on May 12, and the Remembering Elvis tribute show will run the following day on May 13. The show will feature Adam T Elvis, Corny Rempel and Daylin James.

Tickets for all the announced shows go on sale Thursday, February 8 through Ticketmaster and the Casinos of Winnipeg box office. Prices vary per show.