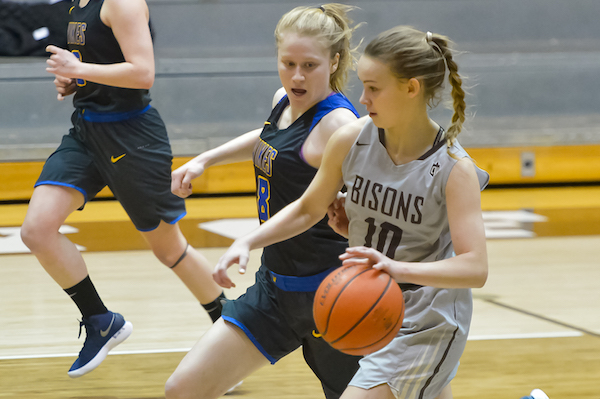 WINNIPEG — The playoff drought for the Manitoba Bisons is officially over as the women’s basketball squad suits up for the post-season this weekend for the first time in eight years.

It’s the first time the Herd will have played in the playoffs since head coach Michele Sung (Hynes) took over from Pam Danis in 2014. Before then, Sung would have been a player on the team herself when Manitoba qualified for a playoff spot.

“It’s definitely a goal we had for this team,” Sung said. “It’s fun for me — I get to experience it (playoffs) now as a coach and I’m having a lot of fun prepping for it.”

Manitoba meets the Alberta Pandas in Edmonton Saturday night (6 p.m. CT) in the Canada West quarter-final game. The winner then advances to a best-of-three quarter-final series.

Neither team has played each other in a regular conference game this season, creating an element of surprise on the court for both sides.

“I think that we have a really good advantage athletically versus them and we’re going to look to steal a game and continue rolling through playoffs,” Sung added.

Manitoba finished as the 11th seed in conference play, while Alberta was the seventh seed.

Over on the men’s side, Manitoba hosts the University of Brandon Bobcats (9-11) Friday at Investors Group Athletic Centre (7:30 p.m.)

The Bisons finished as the seventh seed in the conference, while Brandon finished in 10th.

Both teams met twice during the regular season, with the Herd splitting a series with Brandon at home. In a pre-season tournament last October, the Bisons won 80-67 at the University of Winnipeg.

It’s the fourth consecutive post-season appearance by the Bisons — and sixth over the last nine years since head coach Kirby Schepp has taken over.

“We’re excited to get things going and hopefully we can get on a roll like we did last year and make a deep playoff run.”

Tickets to the men’s home game are available at the door or by visiting GoBisons.ca.

As a proud sponsor of Bison Sports, ChrisD.ca has five (5) pairs of tickets you can win to Friday night’s men’s basketball playoff game. Simply send an email to news(at)chrisd.ca with your full name and phone number. We’ll pick five random entries and contact the winners by Friday morning. Good luck!