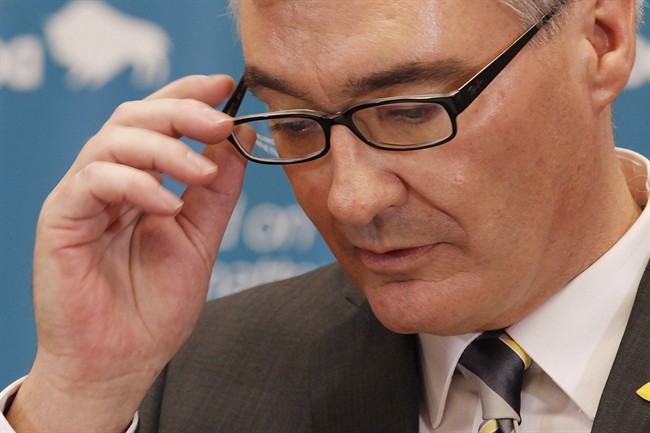 A former Manitoba cabinet minister is apologizing after women have come forward alleging he tickled them and made inappropriate remarks while he was in government for over a decade. Manitoba Finance Minister Stan Struthers pauses during a press conference at the provincial legislature in Winnipeg, Tuesday, April 16, 2013. (THE CANADIAN PRESS/John Woods)

WINNIPEG – Another former Manitoba government employee says she was groped and sexually harassed by a longtime NDP cabinet minister.

Shannon Van Raes told The Canadian Press she worked with Stan Struthers in 2010 when he was agriculture minister. She said that on a flight to an announcement, Struthers asked if she liked being tickled.

“I said no. Then he proceeded to put his hands under my skirt and attempted to grope me,” she said Thursday. “I said ‘no’ and ‘don’t’ pretty forcefully. He paused, but then resumed the behaviour later in the flight making sexual comments.”

Van Raes is the latest of several women who have come forward with allegations regarding Struthers’ behaviour over more than a decade while the New Democrats were in power.

But later in 2010, she found herself alone with him.

“Mr. Struthers got down almost on the floor, grabbed my foot and pulled it toward his crotch, making comments about how it looked and the nail polish I was wearing,” Van Raes said. “I pulled back and the incident really only stopped because other people entered the room”

Van Raes said she complained to her direct boss who took it up the chain of command. The message that came back to her was to grow a thicker skin and suck it up.

“The general attitude at the legislature working under the NDP government was that, if you complained, you were a traitor. You were working against their cause. How dare you?” she said. “There was no investigation.”

After the complaint, Van Raes ended up relegated to a basement office and was given no work, she said.

“It was a constructive dismissal.”

Struthers issued a statement Thursday that said he recently learned his behaviour made former colleagues and staff feel disrespected.

“I am sorry,” he wrote. “I apologize for any interactions I have had that have been inappropriate and that have caused any person to feel disrespected or uncomfortable.

“My intention was never to treat women as anything other than equal and respected.”

Joelle Saltel-Allard said he used to touch her when she worked for Struthers as his press secretary between 2009 and 2011.

“I would be working with him in his office and he would come and touch me or tickle me, often in front of other people,” she told The Canadian Press.

Saltel-Allard said that during a car ride to a news conference, Struthers put his hand on her knee and talked about sex acts he would enjoy. She also lodged a complaint with her boss.

“It was relayed back to me that I basically had to shut up and suck it up,” she said. “They weren’t going to do anything. There was an election coming up and nobody was going to take any action in regards to my complaint.”

Saltel-Allard said she became stressed and anxious, and eventually took a three-month mental-health leave. She decided not to return to the legislature.

“I really felt like I was insignificant and my complaints weren’t respected or even acknowledged. You really don’t feel like working in that type of environment,” she said.

“It was a struggle and it eventually led me to leave.”

NDP Leader Wab Kinew, who took over the party leadership after it was defeated by the Progressive Conservatives in the last election, said Thursday he was disappointed. He said the NDP is supposed to stand up for vulnerable people but failed those within the party.

Kinew said the lack of action was “a failure of leadership,” both on the part of former premier Greg Selinger, who is still a member of the legislature, and others in government leadership roles. Kinew said Struthers should have been removed from his cabinet position and the party.

He said a party commission will investigate the allegations and release recommendations.

The allegations were first reported by the CBC. Karen Peters, a community activist, told the CBC that Struthers tickled her countless times when he was conservation minister and serving with her on a sustainable development roundtable.

Struthers was one of five ministers who resigned from cabinet in November 2014 to protest Selinger’s leadership. Struthers announced in May 2015 he would not run in the April 2016 election for the “good of our family” and his Dauphin constituency.

He was first elected in 1995 and held various cabinet portfolios that included conservation, agriculture, finance and municipal government.

“I have been fortunate to work with many strong, intelligent and talented women and have always valued these relationships,” he said in his statement. “My commitment is to learn from this and do better.”