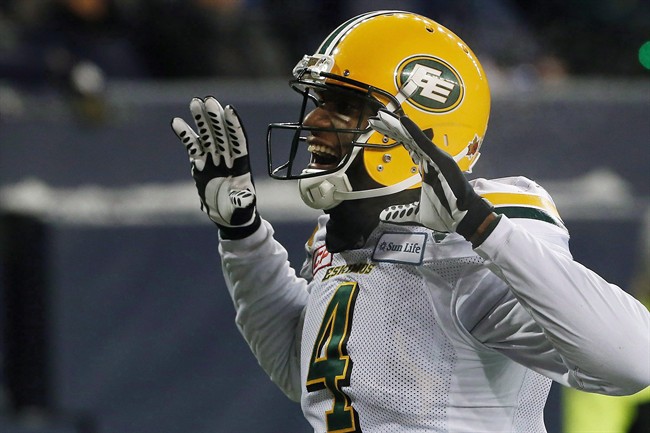 Edmonton Eskimos’ Adarius Bowman (4) celebrates his touchdown against then Winnipeg Blue Bombers during second half CFL western semifinal action in Winnipeg on November 12, 2017. Free agent receiver Adarius Bowman has signed a one-year contract with the Winnipeg Blue Bombers.The 32-year-old was cut on Monday by the Edmonton Eskimos shortly before he was due to receive a $140,000 roster bonus. (THE CANADIAN PRESS/John Woods)

“He has grown tremendously both on and off the field over his years in the CFL, and we’re excited to re-unite him with Matt Nichols and watch him work with our receivers in 2018.”

Bowman has recorded 62 receptions of over 30 yards and has 36 100-yard receiving games during his career.

Bowman will sign autographs Saturday at the Bomber Store with running back Andrew Harris from noon to 2 p.m.