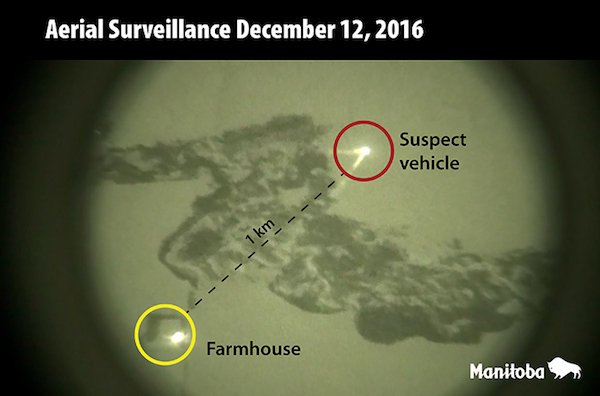 Four men have pleaded guilty to night hunting near Glenboro, Manitoba in December 2016.

The four were caught after numerous tips led to 14 conservation officers and the RM of Cornwallis police service conducting a night patrol in the area.

Officers used an aircraft and located a vehicle using a spotlight to light up a privately-owned field near some homes. Officers on the ground tried to stop the vehicle, but it sped off and became stuck in a ditch following a short pursuit.

Four men were arrested in the early morning hours of December 12.

Their fines totalled $4,000 and their hunting gear was seized, along with a 1995 Chevrolet Silverado pick-up truck.

Anyone with information on illegal night hunting is asked to call their local Manitoba Sustainable Development office or the Turn in Poachers (TIP) line at 1-800-782-0076.

Video of the aerial surveillance operation can be viewed below.