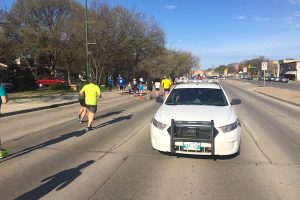 Runners along the Winnipeg Police Service Half Marathon route on Sunday, May 7, 2017. (@WPGPOLICE / TWITTER)

Registration and fundraising efforts are open for the upcoming Winnipeg Police Service Half Marathon.

The Canadian Cancer Society will benefit from the 14th annual event to be held May 6.

Police, justice officials and Mayor Brian Bowman kicked off the initiative on Friday.

The WPS Half Marathon begins and ends in Assiniboine Park and also includes a two-person relay and 5k run.

Funds will be matched dollar-for-dollar by Brain Canada through the Canada Brain Research Fund, a public-private partnership established by the Government of Canada. To date, the event has raised nearly $600,000 for brain research helping fund six research teams across Canada right now.

Registration can be made online or in-person at any Running Room location or the Canadian Cancer Society office at 193 Sherbrook Street.

Pleased to join @Min_Stefanson & other dignitaries for today’s @WPSHalfMarathon kick-off. Funds raised support the Manitoba Chapter of the Canadian Cancer Society See you on May 6th runners! ???? pic.twitter.com/Up5XEKBf64