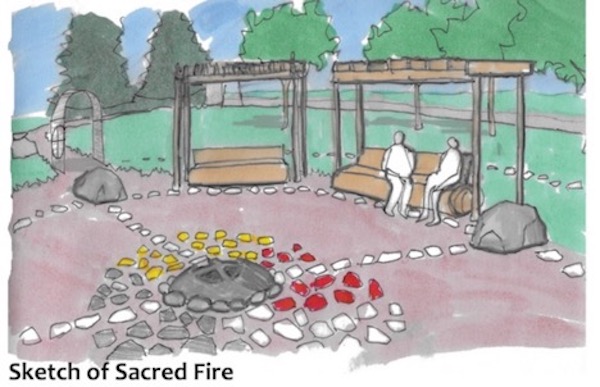 An artist’s sketch of a sacred fire in the future Healing Forest in St. John’s Park. (SHAUN FINNEGAN)

Canada’s second Healing Forest has found a home in Winnipeg.

Construction will begin in March in St. John’s Park on a living memorial to Indigenous children lost to or affected by the residential school system.

Officials with the Healing Forest Project-Winnipeg say the forest will also be a place for learning, including an outdoor classroom where students from North End schools can learn the history and stories of the past.

The idea for the forest first came about in Winnipeg from the National Centre for Truth and Reconciliation.

The city has provided space within St. John’s Park for the forest and will support its maintenance. The Department of Municipal Affairs has provided a grant to fund assist construction, while the University of Winnipeg has granted funds for curriculum development. Additional funds are still being raised to complete the project.

Canada’s only other such forest opened in Edmonton in November 2016 on the north bank of the North Saskatchewan River.