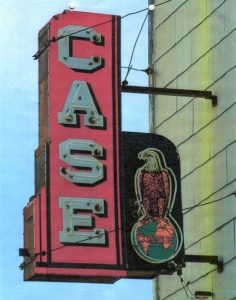 Carman RCMP Detachment is investigating a theft of a neon business sign, shown in a handout photo, from the side of the Stevens Lumber building in Fannystelle, Man. (RCMP HANDOUT)

CARMAN, Man. – Manitoba RCMP are investigating the theft of a neon sign that has been part of a family business for almost 70 years.

RCMP say a neon sign — which is over one and a half metres tall — was removed from the second floor of the Stevens Lumber building in Fannystelle, Man., on Jan. 7.

Investigators say the suspects likely used a bucket truck and power tools to remove the sign in the early hours of the morning.

Sgt. Paul Manaigre says the sign has been in the Stevens family for 67 years and is considered priceless to them.

He says RCMP have exhausted all investigative steps and are asking for public assistance.

Anyone with information is asked to contact Carman RCMP or Crimestoppers.