Festival du Voyageur Will Fill Up Your Winter Calendar

WINNIPEG — Festival du Voyageur officials are prepared as ever to put on Western Canada’s largest winter festival for the 49th year beginning Friday.

With a new executive director at the helm, visitors will notice some changes this year as the festival refocuses its efforts on attracting families. 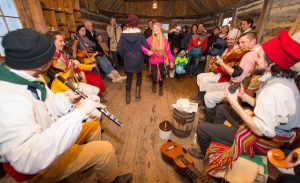 Children 12 and under are free and an emphasis is being put on family-friendly entertainment and activities, which have doubled for 2018. To alleviate some of the congestion often experienced at Voyageur Park, a limited number of day passes will be available for purchase. Visitors are being encouraged to order their passes online in advance of arriving at the park.

During a media preview event on Thursday, snow sculptors from six different countries were crafting their blocks of snow as part of the International Snow Sculpting Symposium competition. Nicolas Audette, marketing and communications manager, says staff had to truck in artificially-made snow this year due to Mother Nature’s lack of snowfall accumulation.

“We’ve had to make our own snow. So a lot of the sculptures in the park are made with artificial snow… but we have enough snow that the sculptures are up,” Audette said.

Teams will work over the next three to four days to finish their frozen masterpieces, which are colourfully lit at night and make the perfect Instagram photo opportunity.

Elsewhere around the park, 156 musical artists will take the stage, including Klô Pelgag, Faouzia, Justin Towns Earle, Madeleine Roger, Royal Canoe, Attica Riots, 3PEAT, and many more. Also on deck is the returning Wood Carving Challenge featuring chainsaw carvers from across Canada, including stars of HGTV’s “Carver Kings” and OLN’s “Sawdogs.” Hungry for some cheese? The Bothwell Cheese Carving Competition is Sunday, February 18 in the Université de Saint-Boniface Portage Tent.