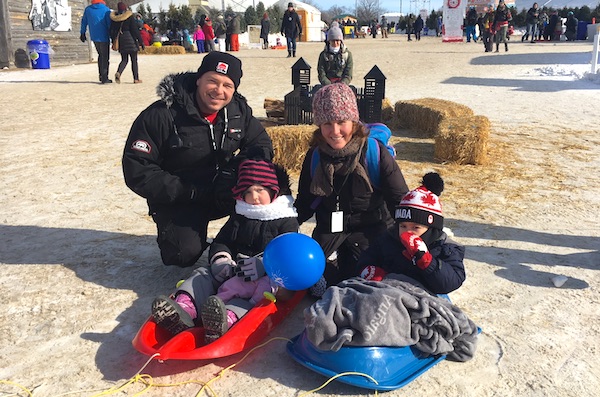 WINNIPEG — Stefan Riel fondly remembers when his parents and siblings were the official voyageur family of Winnipeg’s Festival du Voyageur “at some point in the early 90’s.”

“That was a lot of fun and the cabane à sucre was always one of my favourite stops during festival,” Riel said, as he held his two-year-old son Everett who was having his inaugural lick of snow maple taffy while inside the popular sugar shack.

“Mmmmm… is that good?” Everett’s mom Rebecca asked as he nodded with approval. She said they are proud to expose their son to the Francophone culture and couldn’t imagine spending Louis Riel Day as a family anywhere else.

In its 49th year, Festival du Voyageur, the largest winter festival in Western Canada, is still going strong. Tried and true traditional features such as La Cabane à sucre are always a hit, and organizers are also game to change it up once in a while, especially with evening activities. 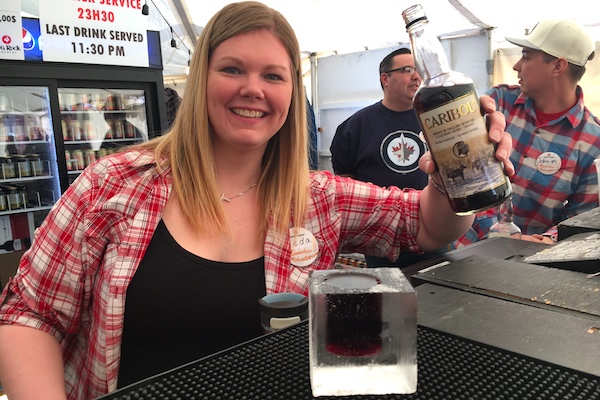 Leda Velychko holds up a bottle of the famous caribou beverage at the Snow Bar Monday afternoon. (MICHELLE BAILEY / CHRISD.CA)

This year, they offered an 80’s night and the very first Pride night will take place at the main festival site this Saturday.

“Anyone planning on coming to events on the weekend should buy their tickets in advance because we had to stop selling them this past Saturday night after reaching capacity at the park,” said Nicolas Audette, manager of marketing and communications.

Audette also pointed out that the main site at Voyageur Park will be closed Tuesday and Wednesday, but a lot of activities will be taking place at satellite locations, including the Voyageur Games at the Marion Hotel. 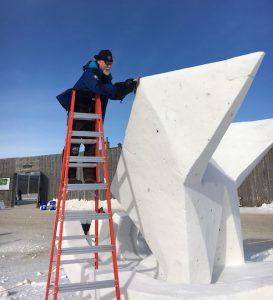 Snow and ice sculptor, Bob Fulks, is from Detroit Lakes and has been coming to the festival off and on for the past 15 years.

“I just came from an event in France and am on my way to Yellowknife,” said Fulks as he shaved snow from his piece entitled “Bird on a Wire.”

“I always have a great time in Winnipeg at Festival because it’s a chance to meet up with other sculptors who I have known for years and meet some new ones,” he said. “And I love the music and the overall hospitality.”