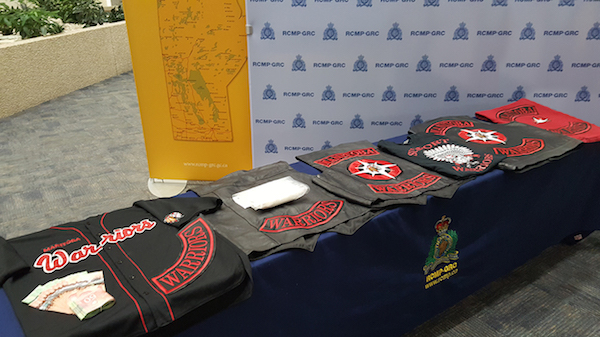 WINNIPEG — RCMP in Manitoba have dismantled a gang-fuelled drug trafficking operation with the arrests of six people.

Officers raided two homes in Grand Rapids on February 14 and arrested four people. Another person was arrested in Winnipeg, while a sixth was arrested while in custody at Headingley Correctional Centre for gang-related drug trafficking.

RCMP tracked the transport of drugs to Harvey Cook Jr., 29, a full-patch member of the Manitoba Warriors, and to his parents Harvey James Cook Sr., 56, and Madeline Cook, 59. Cook Jr. was arrested at Headingley Correctional Centre, where he is in custody on impaired driving charges, while his parents were arrested at their home in Grand Rapids.

Cook Jr.’s supplier, Jesse Richard Thomas, 33, of Winnipeg, was arrested February 14. They say Thomas is also an associate of the Manitoba Warriors.

Police also seized a rifle, shotgun and collapsible baton during their investigation.

“Illegal drugs are insidious and fund many different types of crime,” said Sgt. Paul Manaigre of the Manitoba RCMP.

“Our officers and intelligence experts worked tirelessly on this investigation for many months in order to take not only drugs and guns, but gang members off the street. The RCMP has seen the destruction caused by the trafficking of illicit drugs, and we will continue to enforce the laws against this to their fullest extent.”