Manitoba’s Flood Risk Low, But All Eyes on Future Weather 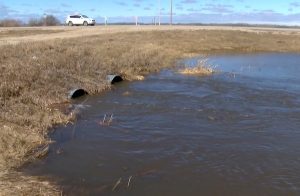 WINNIPEG — The lack of snowpack in Manitoba this winter is turning out to be positive news on the flood front.

The province on Friday released its first spring flood outlook for the season, highlighting there’s little to worry about once what little snow we do have begins to melt.

“Of course, while there is reason for cautious optimism, Manitobans know first-hand that significant winter storms can blow in on a moment’s notice at this time of year and rapidly alter our spring flood projections.”

Schuler says one area of concern is the thickness of ice on some rivers and streams, which could spell trouble in the form of ice jams or flash flooding. Crews began cutting ice on the Red River Tuesday north of Winnipeg and continue to make headway near Breezy Point, officials say. The work is being done to mitigate the potential for ice jamming later on in the season. More than two kilometres of ice has already been cut.

Elsewhere in the province, the flood risk is also low all lakes including Lake Manitoba, Lake Winnipegosis and Dauphin Lake and the Whiteshell lakes.

The province says use of the Red River Floodway is unlikely, but the Portage Diversion will likely be put into operation for ice control along the Lower Assiniboine River.

The flood risk remains entirely on future weather events, so Schuler cautioned that a significant winter storm in Manitoba or the northern United States could increase concerns.

The second flood outlook will be released sometime in late March.